Copyright to texts dictated by spirits and ghosts

Do you remember in Harry Potter and the Chamber of Secrets Ginny Weasley wrote scary texts in blood on the wall while possessed by the Tom Riddle spirit?

A strange question: Who owns the copyright to these texts – Ginny or Tom?

A strange answer: The same question has been already considered by UK and US courts.

Welcome to the crash course on copyright to texts dictated by spirits and ghosts!

Let's kick off with the Cummins v. Bond (1926, UK) case. Miss Geraldine Cummins was a journalist and was also practicing as a spiritualist medium in her free time. If you are looking for a new hobby, take this for a spin.

Her seances looked like that: she was covering eyes with a left hand, taking a pencil in a right hand and resting it on a paper, recording over 2000 words in an hour and a half without any pause.

The image: a piece of the Cummins v. Bond court decision.

Sometimes the sessions were attended by a man named Bond. Frederick Bligh Bond. He was keenly interested in the work of Cummins. One day he published her records with a headline The Chronicle of Cleophas without any permission of Miss Cummins.

Then Miss Cummins sued Bond for copyright infringement. Her arguments were simple: she is the author of the text, so Bond has no right to publish them without her permission.

Firstly, Bond stated that he was a co-author. During spiritual sessions he placed his fingers upon the back of the medium's hand (yes, she had a chance to become a Bond girl) when she was writing, so he was influencing the situation and the spirit's messages.

Secondly, Bond argued Miss Cummins was not an author as she just recorded the spirit's messages but not created them, so the true author is the spirit.

The poor judge has to answer the question: Do spirits have any copyrights?

Regarding the argument that Bond participated in creating the work, the judge expressed a simple point: the work was created in the mind of Miss Cummins, so there was no co-creation by Bond.

The opinion on ghosts' copyrights was much more interesting. The judge said that he was not prepared to make the opinion "that the authorship and copyright rest with someone already domiciled on the other side of the inevitable river".
"That is a matter I must leave for solution by others more competent to decide it than I am", the judge added. 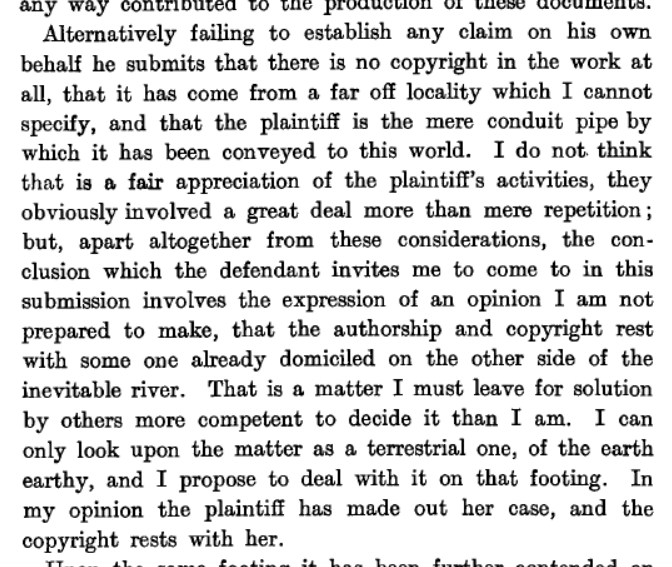 The image: a piece of the Cummins v. Bond court decision.

So, Miss Cummins was recognized as the author.

It is extremely important – the judge didn't say that ghosts have no copyrights. He just said that he was not competent enough to state that. So let's make an assumption that ghosts and spirits are able to have copyrights, and they just can't get recognition of this in the earthly life courts.

Now we make a leap 15 years forward to another continent to see what the US District Court for the Southern District of California said about copyrights of spirits in Oliver v. Saint Germain Foundation (1941, USA). This case is even cooler.

In this story our hero's name is Frederick Spencer Oliver, he was born in 1886, and he was a medium too. But contrary to Miss Cummins he published his book with recorded messages of a spirit himself. The book is called A Dweller on Two Planets, you can read about it on Wikipedia.

The image: the cover of the book "A Dweller on Two Planets" by Phylos. Source of the image: http://www.isfdb.org/wiki/index.php/Image:DWLLRNTWPL1905.jpg

When Oliver was 17, the spirit named Phylos began to tell him cool stories and this had been continuing for 3 years. Poor Oliver had no choice but to write them all down.

FYI, Phylos was from Atlantis, so he told to Oliver a lot of amazing stories about this land. He also described such Atlantis technologies as wireless telephony, TV, and antigravity. One fine day we will discuss the Atlantis patent system, but it will be another story.

Oliver's book was published by Borden Publishing Company. One day they found out that another company had published Oliver's book too without any permission. So that company was attacked with cease and desist letters.

That company filed a claim to the court with a statement that the copyright to the book belongs neither to Oliver nor to Borden Publishing, as the true author is Phylos.

So the judge had to answer something, and it's pretty funny that the judge's name was Dawkins 🙂

Well, judge Dawkins was very inspired by the arguments about the fact that Oliver emphasized the statement he is not an author of the text, but Phylos is.
No, Dawkins didn't limit himself with babbling about he's not competent in the rights of otherworld entities. Dawkins applied the estoppel doctrine.

In accordance with the estoppel doctrine, a person cannot refer to any facts in court if the previous behavior of the person demonstrates the person's disagreement with these facts.

Dawkins analyzed the book and found out that Oliver really denied his authorship and stated that the author is Phylos. Oliver didn't lose the copyrights because of these statements but he lost the opportunity to protect them in court.
It was a pretty elegant decision of judge Dawkins.

The image: a piece of the Oliver v. Saint Germain Foundation court decision.

The judge also added that "the law deals with realities and does not recognize communication with and the conveyances of legal rights by the spiritual world as the basis for its judgment". Ironically, the judge made statements about Oliver's rights despite the fact that Oliver had already died by that day and existed in the spiritual world 🤔

Congrats, now you are a specialist on ghosts' copyright!